Since it’s the holiday season and some of us already traveled in July while other will enjoy a break in August, we thought we would pick a vacation theme for a fun dashboard. Get this, seriously validated analytics about the cruise market!

Worldwide, the cruise industry had an annual passenger compound growth rate of 6.55% for the last 15 years. While only 3,8 M people took a cruise in 1990, 22,2 M passengers enjoyed the ocean rides. Today’s cruise ships are less floating hotels and more like entire cities.
The most luxurious ships have their own theaters, casinos, restaurants, and every other conceivable amenities.
Growth strategies so far have been driven by larger capacity new builds and ship diversification, more local ports, more destinations and new on-board/on-shore activities that match demands of consumers. The industry is also expanding internationally rapidly. These activities help increase penetration in a core North American market that still has growth potential. Only half of the US population has ever taken an ocean cruise. All the cruise ships in the entire world filled at capacity all year long still only amount to less than ½ of the total number of visitors in Las Vegas. 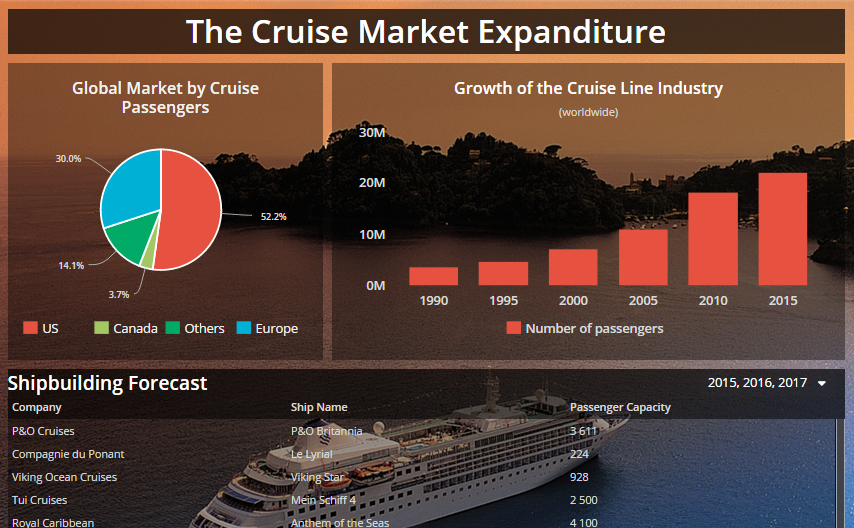 And as always, good marketing is the key. The TV show “The Love Boat” started on ABC TV station on September 17, 1976 in the pre-cable era of only three major TV networks. At that time new couples getting together in the ocean moonlight was good entertainment for mainstream America!
Since the show, the cruise industry has grown ten times over. The former owner of Princess Cruises estimated “The Love Boat” generated over a billion dollars in revenues for the cruise lines. According to their staff, “Oh, The Love Boat!” is still a frequent response when you tell people you work on a cruise ship.

So why not try a cruise for your holidays next year? Meanwhile Happy Summer if you happen to be on the right hemisphere and Happy Dashboarding!