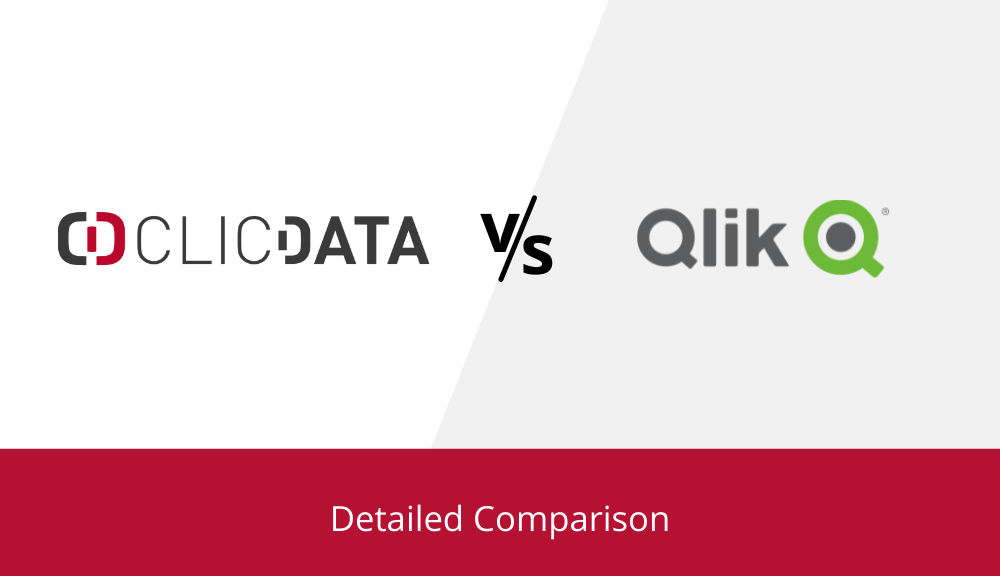 QlikView’s future is probably limited since Qlik Sense is the company’s new flagship product, and QlikView will ultimately be branded a “classic” application—and be replaced.

Here’s an overview of what it takes to implement the Qlik Suite and an attempt to compare it to the ClicData (pronounced “klik-data”) platform.

What is the Qlik Suite?

QlikView is simply a dashboard designer product—and it is being phased out. To compare QlikView to ClicData, we have to discuss QlikTech’s entire suite of products. That’s because we need to have access to the rest of the QlikTech products to come close to the range of functionality that ClicData provides at even its lowest subscription tiers.

An overview of Qlik products can be found here.

It’s important to keep in mind that if a product is characterized as a SaaS or Cloud platform, it doesn’t mean that it is necessarily easy to install, deploy, maintain, or even pay-as-you-go. Using terms such as “platform-agnostic” but not including an operating system as popular as MacOS is indicative of hardware virtualization; the term simply indicates that the product can run on any operating system as long as there is a virtual server somewhere, even if it’s on the cloud.

More importantly, according to the available documentation for the product, if you want to allow secured distribution of dashboards, schedule data reloads, and so on, you’d need to purchase some sort of on-premise or host-based service in addition to a basic or Designer subscription. This explains the need for Qlik Cloud Services and the fact that it can be hosted on a wide variety of cloud platforms— Azure, Google, Amazon, etc. It’s not because the Qlik Suite is available on those platforms but because it can be installed on virtual machines on those platforms.

Developing with QlikView and Qlik Sense

In QlikView and Qlik Sense, you need to build an app or document before you can analyze the data. This means:

In QlikView: You’re going to need the desktop version if you want to develop an app. Development is done locally and without a connection to a QlikView server. QlikView Desktop only runs on Microsoft Windows.

In Qlik Sense: You can develop an app using a web client that is connected to a Qlik Sense server. This means that users can have different operating systems on their computers. Hence, the Qlik Sense solution gives access to more users than the QlikView solution.

In both QlikView and Qlik Sense: Data is loaded at a specific point in time and then analyzed in memory. The analysis is made on a data set that is a snapshot of the real data. The snapshot is of the point in time when the load script for the app was run. The analysis is never in real-time, although you can make it near-real-time by running the load script more frequently, such as every 15 seconds. From an administrative perspective, this means that you first create the app and then set up a scheduler to refresh the data (run the script) according to your business requirements.

How Does QlikView Compare with ClicData?

Clearly, the complexity of the Qlik Suite is obvious. There’s complexity in installation, in the different modules to use, and even in picking QlikView over Qlik Sense. Which one does the job you need? There is also complexity in the licensing model and in the hardware and software requirements. For example, do you need to purchase servers, or do you need to pay someone, possibly QlikTek, to host the servers for you? Do you need to pay for the data connectors? Or are they included? They don’t seem to be.

This is the first massive difference between this suite and the functionality that ClicData offers. With ClicData, you just sign up for a trial, pick the region where your data will be stored, give your account a name—and go.

The second big difference between the two is that ClicData builds a data warehouse while Qlik builds in-memory data snapshots. In other words, ClicData continuously builds upon your data regardless of its source. And if the source system no longer has the data or if you switch systems, ClicData still holds all of your historical data.

Even more than that, the biggest differentiator between the two is that QlikView, now over 25 years old, is built on stale and refactored technology. Progress in the company’s development work is held back since they still need to maintain the operations of the old architecture. It is an on-premise technology that is difficult to get moving forward. A great example of this is Internet Explorer and how difficult it was for Microsoft to phase it out.

But these are just the large overall architectural differences. Let’s take a closer look.

ClicData comes with pre-built connectors that allow you to access your data in hundreds of systems, databases, and applications. The QlikView Connector is basically a custom connector that allows you to connect to mostly ODBC data only via scripting.

ClicData also implements data connections called Smart Views that are ready for consumption and are pre-built for our customers. This can accelerate the dashboard-building process quite a lot as the data is already configured for visualization.

ClicData dashboards are live documents that are always connected to real-time data. So, if the designer makes changes or if data changes, the end-users get to see the results live and in real-time, even if they are looking at the dashboard at that time.

A QlikView dashboard is associated with one data set—a catalog if you will. This will make it very difficult to add visualizations that don’t have a direct relationship to the data already selected, requiring the developer to go back to the beginning and reshape the entire data flow to achieve what is needed.

In ClicData, on the other hand, each visualization can be independently tied to one or more data sets. If in the future, you need to add more data from another system into the same dashboard, you don’t have to redo the entire data process.

With ClicData, you can fully customize the entire user experience by white labeling and configuring menus and login screens, and you can fully customize your home page to include external websites, content, and dashboards. You can decide what goes on the menus, what is presented to the users by teams and roles. QlikView’s AccessPoint is a pre-selected list of dashboards with filtering and sorting capabilities.

At no extra cost, ClicData includes a full set of features to schedule data loads and dashboard publications and to customize emails that include data and calculations.  Additionally, we provide a mobile version of our product available for both Android and iOS which can be used to receive alerts in real-time.  In addition to the mobile app, publications and alerts can be sent via email, Slack, and Teams.

The process of preparing data for analysis, cleaning it, and ensuring that it doesn’t contain bad data is the most time-consuming part of analytics and reporting. ClicData offers several ways to make it easy.

ClicData’s View editor, for example, shown below left, requires you to simply drag and drop once the transformations that you want to be applied every time the data is loaded. Unlike QlikView, shown below right, ClicData doesn’t need you to specify or create special time dimension logic since most things are handled automatically either at the dashboard or data-loading level.

All the information about the QlikTek product suite provided in this blog was obtained directly from documents distributed and promoted publicly on QlikTek websites.

Of course, at ClicData, we believe ours is the best solution, but it’s worth reminding you that the reason we built our platform in the first place was to replace legacy and outdated solutions.

Regardless of anyone’s opinions, the best way to ensure that a specific solution is right for you or not is to try it yourself and see if it works for you, your company, and your data. I urge you to start a trial on both platforms and find out for yourself how well they work for you. Be sure to ask about and consider hidden costs, such as hardware or licensing costs. Don’t be fooled by buzzwords. Let the product speak for itself.